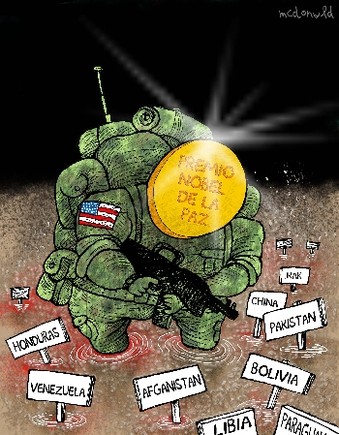 «We must begin by acknowledging the hard truth that we will not eradicate violent conflict in our lifetimes. There will be times when nations – acting individually or in concert – will find the use of force not only necessary but morally justified.

I make this statement mindful of what Martin Luther King said in this same ceremony years ago – "Violence never brings permanent peace. It solves no social problem: it merely creates new and more complicated ones." As someone who stands here as a direct consequence of Dr. King's life's work, I am living testimony to the moral force of non-violence. I know there is nothing weak –nothing passive – nothing naïve – in the creed and lives of Gandhi and King.

But as a head of state sworn to protect and defend my nation, I cannot be guided by their examples alone. I face the world as it is, and cannot stand idle in the face of threats to the American people. For make no mistake: evil does exist in the world. A non-violent movement could not have halted Hitler's armies. Negotiations cannot convince al Qaeda's leaders to lay down their arms. To say that force is sometimes necessary is not a call to cynicism – it is a recognition of history; the imperfections of man and the limits of reason.

But we do not have to think that human nature is perfect for us to still believe that the human condition can be perfected. We do not have to live in an idealized world to still reach for those ideals that will make it a better place. The non-violence practiced by men like Gandhi and King may not have been practical or possible in every circumstance, but the love that they preached – their faith in human progress – must always be the North Star that guides us on our journey.»

In A Just and Lasting Peace, Barack Obama, Nobel Lecture